Online Registration has closed for this event

Online Registration has closed for this event

Events in the month of November 2019
11/1/2019
Manasota 5th Annual Sporting Clays Shoot
The Manasota Chapter is excited to be putting on our 5th Sporting Clay Shoot at the
Sarasota Trap, Skeet and Clays facility!


Novice and expert shooters are all welcome!

Belzona will be on-site providing a demonstration of their concrete repair products.


Please sign up to sponsor the event if you would like your company’s name on the station signs and your logo on the banner by October 4th. 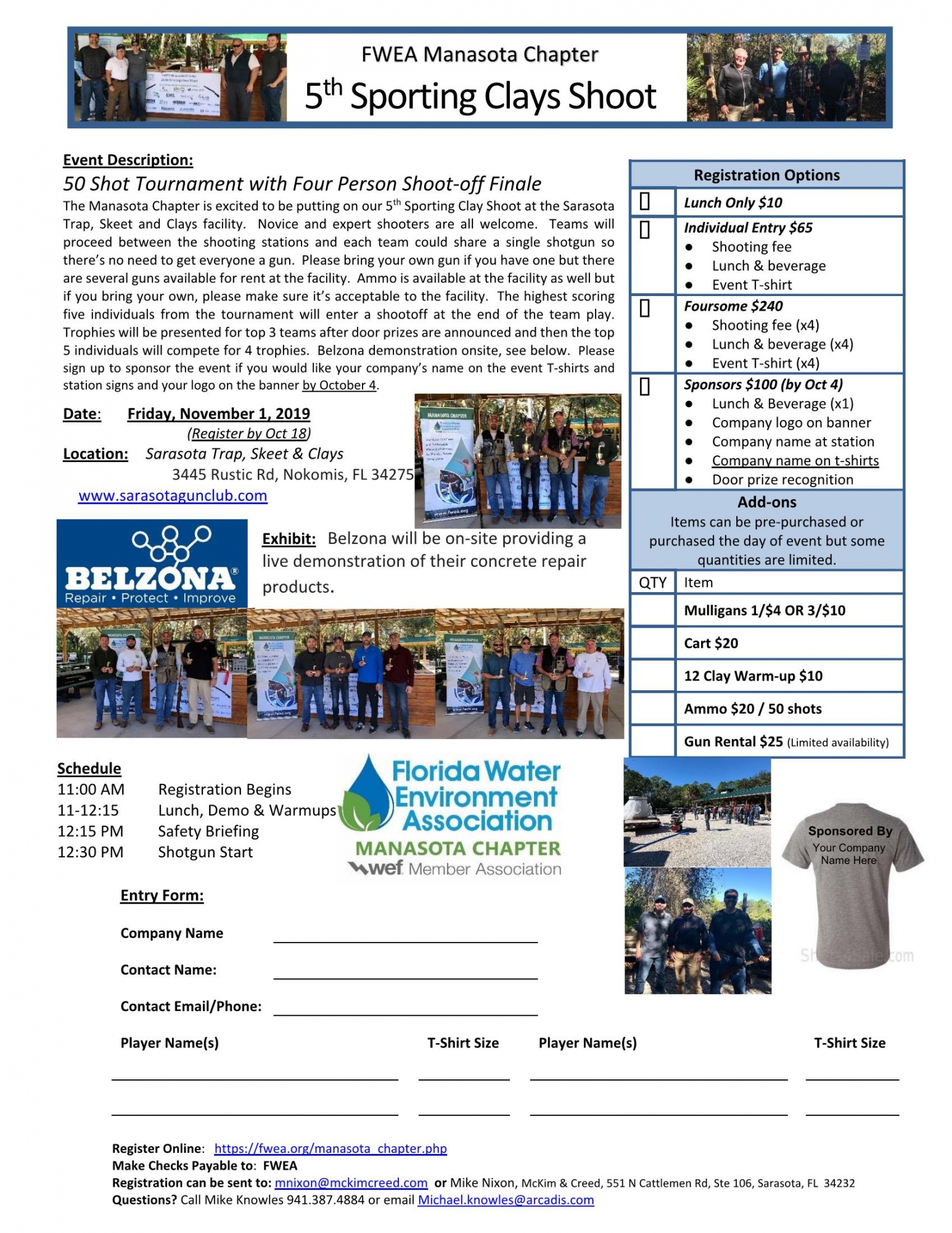 11/14/2019
FWEA West Coast Chapter Fall 2019 Luncheon
The West Coast Steering Committee invites you to come and join us for the Fall 2019 luncheon to enjoy the following speaker/topic:

Speaker Biography: William J. Mitsch Ph.D. has been a university professor specializing in wetland and aquatic biogeochemistry and ecological engineering for 44 years at 4 universities in the USA. He is currently Eminent Scholar and Director, Everglades Wetland Research Park, and Juliet C. Sproul Chair for Southwest Florida Habitat Restoration at Florida Gulf Coast University (FGCU) in Naples Florida where he has been since 2012.  He also holds courtesy faculty positions at University of South Florida and University of Florida.  He has been Professor Emeritus at The Ohio State University since 2012 where he served on the faculty for 26 years.

Topic: Investigating the Causes and Mitigation of Harmful Algal Blooms, Including Red Tide, in South Florida

Harmful algal blooms occur in many different conditions from freshwater cyanobacteria blooms such as those that occur annually in Lake Erie and thousands of other bodies of water to red tide blooms that are limited to saltwater conditions. In August 2018 my lab was able to take samples on two days of extensive red tide pollution near Ft Myers Beach in SW Florida and take samples indicating both the strength of the blooms but also for isotope analysis to see if there was a connection between upstream freshwater sources and downstream red tide blooms.  Our research, limited by the few number of samples that had adequate nitrate in the blooms suggested that there was not a connection between the polluted waters of Lake Okeechobee and the red tide. But our analysis did suggest that the cause of the red tide bloom was “nitrate fertilizer.” The source of this fertilizer could be either from industrial scale agriculture or from urban lawns. Using wetlands and a new approach we have named “wetlaculture” that includes a landscape with wetlands and agriculture working in ecological partnership will be described. These wetlands are capable of removing both nitrogen and phosphorus from polluted runoff so they can potentially solve both saltwater and freshwater algal blooms. We also are investigating a business model that will allow environmental bonds to finance both wetland creation/restoration and compensation to farmers if they convert some of their land to remove nutrients from watersheds.

11/15/2019
15th Annual Treasure Coast Golf Tournament
Come join us for the 15th Annual Treasure Coast Golf Tournament on Friday, November 15, 2019 at the beautiful Champions Club in Stuart!  All proceeds benefit the Norm Casey, Roy Likins, and Indian River State College scholarships.   Enjoy a great day for a good cause out on the course, a buffet dinner, awards, and great raffle prizes and giveways!
more info... 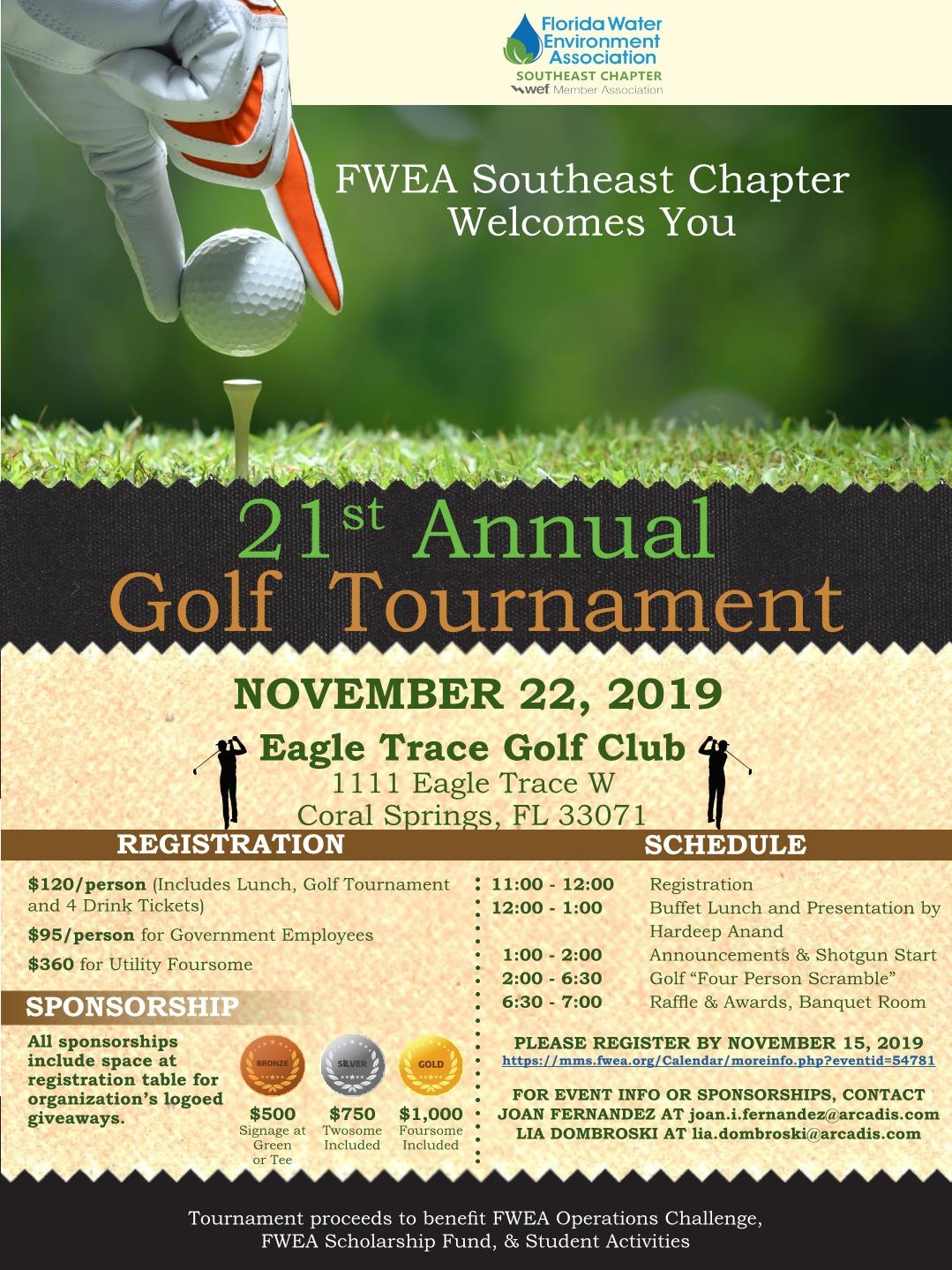